Where to start? I always have some trouble starting these things….

Well, it’s been a while. I don’t know if others have experience this (more than likely as despite our differences, we have very similar experiences), but I am just now coming out of what could best be described as a “mental purge”.

I have experienced something like this in the past, no interest in checking on this blog, reading others stories or even logging into my flickr page. Sure I may have checked my (f)email and seen notifications of others new posts or comments, but, sorry everybody, had no inclination to go a check them out.  I have no idea what may cause this, just like those clothing purges of years ago, but different. It could be that I am really busy with work and when I get back to my accommodations, I just want to relax and veg, throw in a DVD and re-watch seasons  1-5 of DW. I really have to get a hold of seasons 6 and just completed 7 as I missed a number of episodes during season 6, have to clear up some story lines and wibbly wobbly timelines to make sense of future episodes. And what’s with that new dark Doctor? Wow…..way off topic here……

So I noticed this state of disinterest a number of weeks back and wondered how long it would last. Then yesterday, while doing my 30min speed walk on the treadmill, (without music as I had forgotten my ipod) some long dormant neurons and synapses started to fire and I found myself writing this blog in my head. If only one could type while exercising……I know for a fact that what I am typing now isn’t quite how I imagined it yesterday. I’ve even got around to doing some skim reading of other posts.

I would be interested if anybody has any theories….on the mental purge thing not on DW, though you’re welcome to comment on that too, just no “spoilers” please….lol.

A Few Hours in April.

The last time I was home, away from work, was back in April. The weather was not that great but I was able to get the yard cleaned up and everything ready for summer (lawnmower, tires changed, etc).

With time rapidly slipping by, there didn’t appear there would be any opportunity to dress. As I have mentioned before, I usually only dress when I have the house to myself but this opportunity did not appear that it would happen. I did however one day manage to I asked my wife if it would be ok for a few hours and she said sure. Yes!

I had bought a new wig online and really wanted to try it out. Staying with a natural look for my makeup, I spent most of my time in the bedroom taking pictures of myself in office style attire along with some casual looks. At one point, wanting to get an opinion from my wife with regards to the new hair style and colour, I ventured down stairs and asked her what she thought. She said something along the lines of “looks good” or something, to which I commented that the bangs (I haven’t had a wig with longs bangs like this one) kept falling across my face to which she replied “you have to get use to it”.  I also asked if she minded seeing me this way (despite her knowing since early in our relationship, and having dressed may times in front of her in the past,  I still feel silly dressing in front of her, maybe even more so now than in the past…I know…still got to have that talk). She said she didn’t mind, “I just don’t get it”, to which I replied “neither do I”.  And I retreated back to the bedroom.

I must say, I really like the new hair style. I think it looks natural.

Just to get back to the “feeling silly in front of her” bit, I think that my come for the fact that I don’t really know how to act in front of her. Should I be “the man she married wearing women’s clothing and makeup” or “a woman friend dropping by for coffee”?  Walking, sitting talking as womanly as I can?  I know , I know….I have to talk to her, but with absolutely no opportunity to dress until the fall, I have time to formulate the correct approach to breach this topic. I’ll take any suggestions in the meantime.

Nothing says woman, more than nice long nails (or so WE all think). I have read all the discussions on false nails vs real nails and how long one should or could grow them. Well I wanted to try and see if I could grow mine to any substantial length. I have always been a nail chewer so this was going to be a challenge.

Since the beginning of the year, I took extra care of them. I had read that keeping them moisturized and massaging the root beds would help. I did that diligently every day. I kept them nicely shaped with an emery board. Surprisingly, none of the guys that I work with noticed…If they had, they WOULD have said something..lol.  When I got home, I wore gloves while working in the yard, but as I mentioned above, time was growing short, unlike my nails that had miraculously grow to a significant length.

I got called out by my youngest daughter first…”Daddy, why are your finger nails so long?” followed by lame excuse “I haven’t had time to trim them”.  This was followed a couple of days later, while I was typing on my laptop (which, with near flush mounted keys, one has to re-learn to type, not with the finger tips as the nails stop full depression of the key and have a tendency to “clickity click” on the spaces between the keys….you have to use the finger pads), my wife stated “you really should trim your nails”….this was just a couple of days before I got to dress so I wasn’t going to do anything just then

So here are some pics of the results. 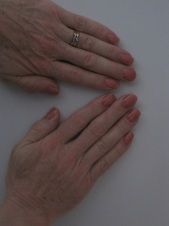 The red polish I just had to try on. I “borrowed” it from my eldest daughter as I was scrambling to find some nail polish remover. I could not find my small bottle and had to use hers. I only did the one hand and it was only on for a few minutes. Oh what could have been.

Right after I put my girl clothes away, I removed the nail polish and sliced off the extra lengths of keratin. My fingers felt strange for a number of days after that as I had become very accustomed to the extra length. And guess what, I’m back to my old habits and the nails seem to get small rips on the corners that snag on clothing. Again, I have lots of time to get them looking half descent.

I’m glad I managed to get a bit of my creative spark back and to get this post together before I head home again. It’s only another couple of week before I get to see the family who have lots of activates already planned.